Gambling: It’s the Name of the Game

A quick scan of Pittsburgh’s newspaper archives reveals that Pittsburghers have always been fond of gambling—whether legal or not.

Pittsburgh began as a working-class community, and many have viewed gambling as a harmless pastime, a way to earn a quick buck, or a chance to escape the daily stresses of a burgeoning industrial town. After a long, grueling day at work, mill workers would go straight to the bars for a beer and a little gambling. Gambling was so commonplace that it is estimated that the local numbers kingpin, Tony Grosso, grossed $30 million a year. During his reign, from the late 1930s to the mid-80s, Grosso is thought to have employed as many as 5,000 people at any one time.

Headlines from old issues of The Post-Gazette read like something from Al Capone’s Chicago. “Police Seize Big Gambling Stronghold” emblazoned the front page of the January 20, 1934, issue. “Numbers Rackets Gets Set-Back” headlined the January 26, 1942, edition. That article details how bookies held an emergency meeting after the city’s papers decided to refrain from publishing daily stock totals. The bookies’ “daily number” derived from those stock totals.

Numerous stories review raids on gambling houses throughout the area. The prevalence of such articles and the depth of information in them about how the numbers rackets operated suggest that while the government attempted to eradicate gambling, many officials may have looked the other way from time to time.

Changing Lives for Better and Worse

With so much money to be made on gambling, the Commonwealth eventually concluded that if you can’t beat ’em, join ’em. In 1972, the Pennsylvania Lottery debuted with its own version of the numbers game. It offered a 50-cent ticket for a weekly drawing.

In 1980, one of the biggest scandals in Pittsburgh gambling history happened. Nick Perry, local broadcaster and the announcer for the Daily Number, allegedly spearheaded a con which became known as the Triple Six Fix. The ploy involved all of the ping pong balls in the lottery selection machine—except those bearing the numbers 4 and 6—to be switched out with weighted copies. Thus, the chances of those numbers being selected by the machine grew exponentially. Prior to the drawing co-conspirators purchased lottery tickets with number combinations of 4s and 6s. They also played those numbers with bookies.

On April 24 of that year, the number hit 666. The unusual betting patterns noticed by bookies and lottery staff tipped off officials that something nefarious may have happened. The subsequent investigation brought charges against six men, Perry being one of them. Perry, who was convicted and sentenced to prison, maintained his innocence until his death in 2003. Many people remained convinced of his innocence, sparking theories of political corruption, suggesting he was merely a scapegoat.  Either way, the “Triple Six Fix” brought tragedy and drama to gambling in Pittsburgh.

While gambling can sometimes breed trouble, it can also change lives for the better. Why, if it weren’t for gambling, there might not be a Pittsburgh Steelers. In 1932, Art Rooney, the founder of the team, started the franchise with winnings gained at the races. It is reported Rooney won $2,500—an enormous sum for the time—which enabled him to purchase the NFL entrance fee.

Of course, Rooney had to travel to New York to win his jackpot at the Saratoga Racecourse, as one did not yet exist in Pennsylvania. However, in the early 1960s, The Meadows Racetrack opened in Washington County. This new facility allows locals to place wagers on harness horse races held in their own backyard.

With the success of casino ventures in nearby states, Pennsylvania once again decided to take a chance on gambling. At the beginning of the 21st century, Harrisburg began to float the idea of legislation that would allow casinos in the state. Eventually, officials granted a casino license for southwestern Pennsylvania. 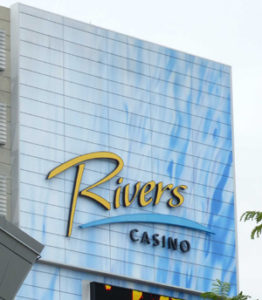 On August 9, 2009, gambling came once again into the spotlight. The new Rivers Casino opened on Pittsburgh’s North Shore. The Rivers Casino is a spectacular complex. With 3,000 slot machines and various other games, plus three dining and lounge areas, this destination provides guests with round-the-clock fun.

Perched on the shore near a bend in the Ohio River, the casino offers a sweeping view of the city’s skyline. The floor-to-ceiling windows allow guests to enjoy themselves while basking in the glow of the Golden Triangle.

The Live! Casino opened in the Westmoreland County Mall on November 24, 2020. The newest edition to Pittsburgh area casinos features 750 slot machines and 30 live-action table games on the first floor. The second floor offers a host of food and entertainment, open to all ages. The Live! Casino also offers FanDuel Sportsbook, an online sports betting site. Online sports betting has been legal and active in the state of Pennsylvania since 2019.

While Pittsburgh has a checkered past with regard to gambling, there’s every hope that the continued development of our great city in the 21st century can bring with it an era of more responsible gambling.  The hope is for an era that embraces the glitz, glamour, and safety of resort level attractions while leaving the shadowed past far behind.