Cutting Down Your Own Christmas Tree in the Pittsburgh Area

The Christmas tree at the Point, department store window displays, and the decorated Nationality Rooms at the University of Pittsburgh are a few of the must-sees during the holiday season in Pittsburgh. In 1999 The Pittsburgh Creche was added to the holiday decorations in town. It quickly became a beloved place to visit at the holidays for residents and visitors alike.  This privately-owned manger at the US Steel Plaza is a larger-than-life nativity scene. It is the world’s only replica of the Vatican’s St. Peter’s Square display in Rome. 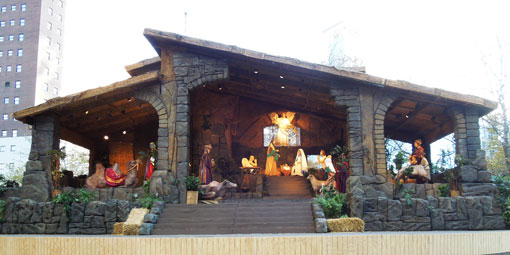 Creche is a French word meaning manger or crib.  The custom was first introduced 1223 A.D.(C.E.) in Greccio, Italy by St. Francis of Assisi, the Patron Saint of animals and the environment. His tradition of depicting the manger scene began as a way of portraying the of Jesus’ birth.  This simple pastoral scene has been inspiring onlookers for centuries. St. Francis would most likely be pleased to know the tradition continues. 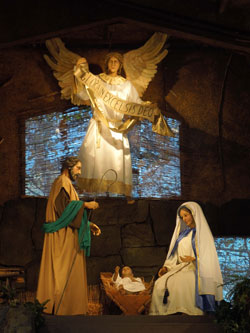 Louis D. Astorino, chairman of the Pittsburgh architectural firm L. D. Astorino Companies, was on a business trip in Rome. While there he visited the Vatican’s Creche. He was so moved he felt compelled to bring a similar one to Pittsburgh.  Astorino sought approval from Vatican officials and procured the actual plans for the creche.  He then commissioned its gifted sculptor, Pietro Simonelli, to recreate the figures for Pittsburgh’s creche.

Simonelli created masks for many Italian and European opera houses, articles and animals for Italian television programs, and portraits. they are made from a variety of materials. Some were papier-mache, bronze, resin, and terra cotta for private clients.

The creche figures are constructed with a wooden frame. Their their hands, feet, and faces are made from modeling clay.  These clay articles were covered with papier-mache and weatherproofed.  In keeping with the Vatican tradition, local communities of religious women designed and sewed the garments for the figures.

The stable was built according to Vatican architect Umberto Mezzanna’s plans.  It is 64-feet wide, 42-feet high, 36-feet deep and weighs 66,000 pounds.  This enormous structure was constructed at the Civic Light Opera Construction Center. Each year it is reassembled in sections. Cranes lift the creche’s panels, which weigh 800 to 1,000 pounds each. JE Scenic Technologies, creators of stage sets for Broadway and local theater productions, brings the plywood and steel recreation to life.

The Creche Has Grown 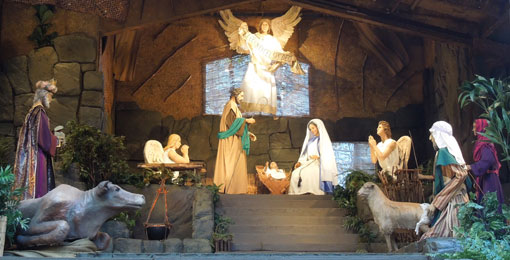 Initially, the display contained the infant Jesus, Mary, Joseph, the Three Kings, two shepherds, and several animals.  In 2000, a unique-to-Pittsburgh figure was added. It was an angel that Simonelli created, which hangs over the crib.  More animals were added as well, including a full-sized camel.  In 2001, a woman and child, with the woman holding a basket of fruit, were included. In 2002, JE Scenic Technologies created a kneeling shepherd for the creche. The following year they created a full-sized reclining cow.  Two more shepherds were added later.  In 2007, two additional angels were added. This brought the total figures in the display to 20.

Recreating and maintaining the creche is a collaborative effort with more than 30 organizations and businesses donating materials, labor, and funds. Local musical groups and choruses as well as national singers have performed every year at the creche. One year, Italian bagpipers, in the tradition of ancient shepherds, came from the village of Scapoli in Italy’s Molise region to perform.

The Pittsburgh Christmas creche certainly quickly grew to becoming a beloved tradition.  Besides being a scene of reverence, it has become a destination for families to gather and share the holiday spirit.  Children are delighted by the sight of the life-like figures. In fact several couples have gotten engaged at the landmark.

The creche is on display from around Thanksgiving through Epiphany in January each year.  More than a quarter of a million visitors are expected to visit the creche during that time.