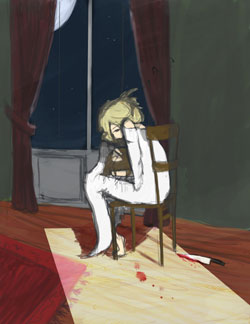 Congelier House is a monumental part of Pittsburgh’s haunted history.

The terrifying story of what has been called “The Most Haunted House in America” would make one very dark and horrifying movie. Some parts of the legend seem to be larger than life. Is Congelier House really filled with the tormented spirits of all those who tragically lost their lives within its walls?

There was once a house in Pittsburgh’s Manchester neighborhood on the Northside. It was known as the “House the Devil Built” and believed to be the most haunted house in the nation.

According to legend, a man by the name of Charles Congelier made a fortune in the south after the Civil War and made his way to Pittsburgh, Pennsylvania. He built a beautiful mansion in the 1860’s at 1129 Ridge Avenue. He lived in the house with his wife Lyda and their maid Essie. Charles and the maid were having a secret affair until his wife overheard what was happening in 1871. She collected a knife and meat clever and killed the two lovers. A friend of the Congeliers found Lyda days later in the home rocking in a chair while she hummed lullabies to the severed head of the maid.

The house remained uninhabited for about twenty years due to the horrific tales about the Congeliers. A railroad company purchased the home in 1892 and converted it into apartments for the rail workers. The workers complained of strange sounds and activity and refused to stay in the building. The house went back on the market.

Dr. Adolph C. Brunrichter purchased the home in 1900 upon his arrival in America. Dr. Brunrichter was a recluse and never left the home or socialized with the neighbors. He would have been forgotten entirely if it hadn’t been for the night of August 12, 1901 when the neighbors were startled by the sounds of a woman screaming, followed by an explosion of light from within the home. The police arrived and discovered the body of a woman missing her head. Dr. Brunrichter was nowhere to be found, but the police uncovered a strange laboratory with the severed heads of five more women. Notes found in the laboratory revealed that Dr. Brunrichter had been performing experiments on the heads to keep them alive after decapitation.

Dr. Brunrichter was never found, but in 1927 a man was arrested in New York claiming to be Adolph Brunrichter. The man was drunk and told police stories about his experiments in Pittsburgh, along with the locations of more bodies. Police searched the locations, but were unable to find any bodies. The man was imprisoned and referred to as the “Pittsburgh Spook Man” by the newspapers. He was later deemed harmless and released from prison. He was never heard from again.

Congelier House began to have a reputation for being inhabited by spirits and attracted those interested in psychic and supernatural phenomena. Medium Julia Murray and inventor Thomas Edison were both believed to have visited the home in the 1920’s. Murray was said to have detected a gruesome spirit that she believed had the potential to kill and the power to travel beyond the house. Edison had traveled to the house while working on a device that would allow him to communicate with the spirit world.

The End or New Beginning?

The house sat empty until the Equitable Gas Company purchased it. They converted the home again into apartments for their immigrant workers. The men living in the building heard demonic voices and discovered two of their fellow workers dead in the basement. It appeared as if the men had been murdered, but there was nowhere for a killer to escape. The other workers immediately moved out of the house.

The Equitable Gas Company itself remained in the neighborhood, but on November 14, 1927, workers were attempting to repair a leak atop a massive natural gas storage tank. A giant flame erupted from the tank and sent the container into the air. The eruption sent debris and human remains everywhere. More tanks began to explode, creating more large fireballs. The smoke and destruction were visible for miles. The damage reached as far as East Liberty. The house at 1129 Ridge Ave was only two blocks from the site of the explosion. The house itself was completely demolished, leaving only a large crater behind. Locals believed the house was transported back to hell.

Although the house is no longer standing, many believe the original location of the home to be a hotspot for spiritual activity. It is said that the spirits of the tortured souls have been spotted wandering the highway that was built on the location of the house.

Facts about the Congelier House

The first recorded house built at 1129 Ridge Ave was in the late 1880’s. It was an average row house; typical of the working-class neighborhood it was located in. A mansion would have been quite unusual in Manchester and the industrial neighborhood would have been undesirable for anyone building one.

There is no record of a Charles Wright or Lyda Congelier. The home was never used as a dormitory for immigrant workers and there is no record of it being owned by a Dr. Adolph Brunrichter. Troy Taylor did some extensive research into the legends of the Congelier House. He could not find any evidence of Dr. Brunrichter’s existence and managed to debunk the legend as a whole through his research.

A Congelier family did live at 1129 Ridge Ave during the 1920’s. Marie Congelier was killed indirectly in the Equitable Gas Company blast in 1927. The windows of the home shattered and a shard of glass severed a main artery in her leg. Her family remained in the home until it was demolished to make room for the highway.

The Congelier Mansion story has fascinated people for many years and has since grown into a famous ghost story. The true origins of the legend may never be known, but this story has become an important part of Pittsburgh’s haunted history whether it’s true or not.