Tapping into the Beer Scene

The British Army established the first brewery west of the Alleghenies at Fort Pitt in 1765. By 1860, there were 1,269 breweries in the U.S. which produced more than one million barrels of beer for a population of 31 million inhabitants. New York and Pennsylvania were the leading producers, brewing 85 percent of all the beer produced in America. The Pittsburgh Business Directory reported in 1895 that there were approximately 30 breweries in the Pittsburgh area. They have changed hands, been renamed, or merged over the years. Some failed while others prospered.

In 1803, almost 50 years after the first brewery, The Point Brewery was founded by Colonel James O’Hara. This was the first commercial brewery in the area. After that numerous brewhouses opened in the area. Joseph Wainwright moved to the area and in 1818 used his father’s money to open Joseph Wainwright Brewery in Lawrenceville. The M. Winter Brothers Brewery was established by a trio of Bavarian brothers in 1883. Michael, Alois, and Wolfgang Winter gained possession of an old brewery in the South Side at Josephine Street. Their brew was sold in wooden kegs instead of bottles. Using the skill Michael learned working in a Chicago brewing company they went on to grow and expand. In 1899 The Wainwright Brewery and The M. Winter Brothers Brewery merged with The Pittsburgh Brewing Co. Both remained open and operated with their own names until shutting down in 1920. 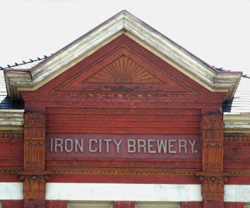 Breweries outside of Allegheny County

Outside the city, beer was just as popular. In 1865, The Benedictine monks at St. Vincent’s Archabbey in Latrobe began brewing beer and selling their Monastery brew to raise funds. They used the proceeds to help the poor. After 42 years, they closed the brewery in 1898.
In 1881, Welsh immigrant William “Stoney” Jones came to Sutersville, PA, and legend has it that Jones won the Eureka Brewing Company in a poker game. He renamed it the Jones Brewing Company. The locals referred to the beer as “Stoney’s” beer, thus naming the brand. In 1907, the brewery moved to Smithton, PA.
The Duquesne Brewing Company was established in 1899 and was known as the “Prince of Pilsners.” It operated on the South Side and eventually joined the Independent Brewing Company of Pittsburgh in 1905. The brewery dissolved in 1972. Besides its beer, Duquesne Brewing was also noted for its large clock. This icon was larger than the clock face of Big Ben in London and kept the time until 1999. Pittsburgh Brewing took it over and since then there have been a succession of advertisers using the clock to trumpet their brand.
Rolling Rock beer was established in 1939 by the Tito Brothers in Latrobe, PA. Its distinctive green bottles and the mysterious “33” on the bottle’s label has made Rolling Rock stand out in the crowded beer market.

Prohibition laws began to be enforced in Pittsburgh in January of 1920. Those for this law were known as “drys” and those opposed were called “wets.” As we all know Pittsburgh is made up of many ethnic groups. Some of which have a culture where alcohol consumption is simply a part of. Therefore it’s no surprise that shortly after Prohibition started Pittsburgh was called “the wettest spot in the United States.” Even with so many ignoring the law prohibition wreaked havoc on the brewing industry.
Many of the breweries that did survive the national ban on alcohol soon saw their companies change hands as larger companies bought them out. Pittsburgh Brewing Company and its Iron City brand of beer, the beer most associated with Pittsburgh, changed hands several times. Eventually being acquired by City Brewing Company and moving production to Latrobe. In 2006, the Rolling Rock brand was purchased by Anheuser-Busch and the brewing of Iron City beer was transferred to their brewery in New Jersey.

Brewing has come full circle in Pittsburgh. The industry started off with numerous, small breweries until the late 1800s when many breweries merged to form brewing giants. Now with the recent recession, the market has reopened once again for the smaller brewers. Micro-breweries and “nano” breweries are revolutionizing the industry.
In 1989 Penn Brewery opened its doors in the old Eberhardt & Ober building. They have had their ups and down over the years at Penn Brewery, but its beloved Penn Pilsner is still being brewed there.
In August of 1996, the closed St. John the Baptist Church in Lawrenceville reopened as the Church Brew Works. The brewing takes place in the front where the altar once stood. In 2010, attorney Mark Dudash mortgaged his house to re-launch Duquesne Pilsner. Contracting with City Brewing in Latrobe, Dudash brewed 500 barrels of the beer, and it sold out in a week.

Full Pint Brewing near North Versailles, the East End Brewing Company in Pittsburgh, North Country Brewing Company in Slippery Rock, and Rock Bottom Brewery are some of the micro-breweries opening the taps in our area. Pittsburgh is such a “beer town” that it was selected as only one of a few cities in the country to welcome a Hofbräuhaus, which is modeled after the legendary Munich Bier Hall.
Nanobreweries are small operations with a few people who brew smaller amounts of beer than microbreweries, but they nevertheless are making a large impact on the beer-drinking scene. The Beaver Brewing Company is just one in the area that has embraced the art and science of brewing to develop creative beers that compete for space in Pittsburgh’s vast brewing palette.
As always, when it comes to Pittsburgh beers, the bottom line is bottoms up!