An Ode to Fifth Avenue

When we move to a new apartment, whenever this summer that might be, we may have a beautiful inside, but we will never have as beautiful of an outside. On Fifth Avenue, life is alive. A black truck honks its way around the white and purple Chatham bus parked in the center of the busy street. The bus is just waiting for traffic to slow enough that it can turn onto Woodland Road, stop at Gate House, and pick up some students waiting for a ride up the hill. But this road is impatient. Cars whiz around other cars, barely stopping for traffic lights, racing the sign which indicates speed, perhaps intentionally defying it. If the cars could talk, I’m sure they would. You say 35 miles per hour? Well, I can do 60.

A lone girl crosses the street. She carries a canvas bag drawn over her right shoulder, and I ponder what the point in canvas bags are. Isn’t she afraid that the snow will fall inside the bag and turn her textbooks into swampy, sticky, nose-runny pages of words? She wears a black mask which covers the depths of her face. It’s the middle of a Wednesday afternoon. Later in the evening a group of ten, twelve boys, huddled together, will run across the dark street, taking a gamble, hoping that their timing is exactly right. No one crosses at the cross walks on Fifth Avenue. Apparently lights and walk signals are for amateurs. I can’t say I haven’t fallen trap to this myself. The streets are for students. And cars. And residents. And whomever else happens to transpire on one of the main streets of the city. Each time I make a wager and tread from my side of the street to Chatham’s side of the street I slightly panic that a police car is going to pull up and give me a ticket for jaywalking. 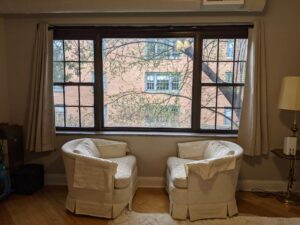 In this one week alone—just seven days—the seasons have changed four times. The tall, broadleaf-deciduous tree outside my widow alerts me to the current season outside. The tree is somewhat slanted, tilted from previous year’s weight of snow on its branches. Sometimes I wonder when it will fall over. If there is a tornado, our window’s fate may be decided: doomed from the repetitive slapping of the tree’s branches. The tree is supposed to lose leaves in the fall and regrow the leaves in the spring, but it is so confused that it no longer follows natural rules and just does its own thing. Its leaves are broad and flat, no needle-like leaf in sight.

“It’s snowing!” I call out to my roommate who is lying curled up under a pile of white, fuzzy blankets in her bedroom.

From where I am perched, I have two views of the freshly fallen snow. One, outside the treasured glass window, the tree covered in layers of white, cotton-candy like snow. Little crystals float down besides the tree, sometimes slowly, and sometimes so fast, they blend in a maelstrom. The other view is outside another window, a smaller, higher-up one, in our kitchen, above the sink where we wash our dishes and fill our glasses with water. We never bothered to cover that window with a curtain. Unless robbers climb the very tall rooftops of our building, there is no one else who could ever peek in. Positioned on my chair by the window in the living room, I can see so perfectly outside the window in the kitchen too. There, snow falls and piles itself on the tiles of our building. That snow will never be touched. It will pile and pile until one day it melts, and drips slushy wetness down to the ground below, and then dissolves

“Shira, it’s raining!” I yell excitedly, as I sit with my nose glued to the double window in our living room, watching hurried individuals rush by Fifth Avenue, ducked under umbrellas, hiding under hoods of raincoats.

She grumbles something at me, really at the weather, and I can imagine her rolling over in bed and throwing a pillow over her head.

While most people hate the rain, from inside, I love the rain. It reminds me of cozy evenings at summer camp, forced indoors into my cabin with my friends, as we fell asleep to the pitter-patter of rain drops, and sometimes major storms, on the red-roofed cabin tops. When it rains, I feel safe and protected. The sky has contracted. It is cloudy, sometimes grey, sometimes just dark. The droplets fall and drip onto the window. I put my hand against the glass, amazed at how close I can be to the water, and yet, how far away.

Another day elapses, and I am in awe of the bright sunshine which greets us through the tan curtains of the window. Sometimes you can tell how bright it is outside without having to even open the window shades. I don’t like the sun, as it gives me migraines, but I figure I should let some fresh light into our otherwise dimly lit, dark apartment. We don’t turn our lights on much, as the electricity bill soars when we do. I push the curtains to one end of the window. The light floods our apartment, heating it more than our heater ever does. With our thermostat running, the warmest we reach is a cool breeze without a shiver. But with the sunlight, if I lower myself down in the chair to the exact right angle, the sun heats my body, and it feels like a warm summer day. A white van turns into my building’s driveway but stops short of pulling all the way in and getting stuck in the black hole that is the parking lot behind my apartment. The farther in you get, the less likely it is that you will have an easy escape. 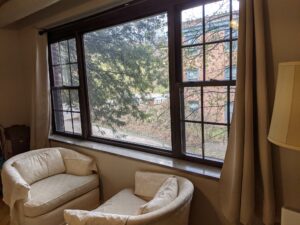 On Friday it looks calm out. As I peer out the window, at the grayish blue sky, I notice some leaves on the tree whose branches, I swear, were just recently bare. The leaves are green and fluffy and line the branches from one edge to another. Spring is coming. I must remind myself that it is probably 34 degrees out and I am lucky I am inside. But with the freshly new green leaves (are they actually new? I’m not even sure) coating the branches, there is room for me to peer in between the gaps at the street seemingly far beneath. A man stands at the corner texting on his phone. I wonder what he is saying. I wonder who is on the other end of that message. A large, green Port Authority bus zooms by. Another bus follows shortly behind it. I don’t understand how the busses can stop so suddenly to pick up their passengers when they seem to rush along like a train with constant steam. In my head I think of the Dr. Seuss rhyme which goes one fish, two fish, red fish, blue fish. One bus, two bus, red bus, blue bus, I sing silently.

This tiny view of city life gives me a breath of fresh air. My roommate and I often joke that our apartment is really one big room. Sure, there are technically two bedrooms, a bathroom, a kitchen, a hallway, and a living room. But we have learned that the walls are very thin, that she can sit on one side of the apartment, and me on another, and we can have long conversations without the need to get up from our seats. I can watch tv with my roommate in her bedroom, as I cook dinner in the kitchen. I close the door to my bedroom when I take a phone call, out of habit, out of my respect for my roommate’s right to quiet, but I don’t think quiet ever actually comes. My conversations are hers, and hers are mine. She’s taken this notion to a whole new level. When she makes phone calls, she puts the calls on speaker phone. “You will never guess what happened today,” her mom nearly screams. “It’s disgusting.”

My roommate loves to sit at her desk in front of her bedroom window, which faces frontwards, right out at Fifth Avenue. She adores that view of the street. I prefer my side-window, my sneaky, spy-like spot from which I look out at the busy street below, but no one looks back at me. From there, I can watch everything that goes on and no-one even knows it. I’m a detective, sussing out all the happenings of Shadyside. Although I am Rapunzel, not allowed to leave the walls of my own apartment, I feel more like Cinderella, in my own little corner,
in my own little chair.

Me and this patch of Fifth Avenue have gotten to know each other real well, I’d say. Something continuously draws me back to the old, white cushioned chairs by the windowsill of our living room. I toss the arm covers onto the rug, and drag one chair in front of the other, so that one can serve as a footrest, or a table for my books. That chair slants down slightly, as the wood of the leg has split and is waiting for me to buy duct tape to put it back together. I’ve fallen asleep on the other chair many times, in positions others question, and then try it out themselves and realize it is truly quite comfortable.

Peering out the window relaxes me and places my brain in a trance. From the window I can see everything. I think about how lucky I am to have Fifth Avenue. Not everyone in quarantine has a Fifth Avenue. I’m nervous for when I move and the only view I get is of quiet, dark, old side streets like Northumberland or Solway. No heavy traffic. No constant flow of people running across the street. No sounds of sirens bursting down the road in the middle of the night, chasing the latest emergency. This street lets me know the world is still moving on, even on the days when I am not.

I place my calendar and a notebook on the windowsill, next to a pink pen and a blue mechanical pencil. My Harry Potter themed water bottle, and a large 20-ounce container of blue Gatorade sits next to these items. On my lap is the navy blanket with flowers I lug around my apartment, and my silver screened laptop, closed. Two books sit on the chair in front of me. One for school, and one for fun. I daydream about an essay I should be writing. I write the essay in my head. I jot down notes on my cell phone. The paper, the typing, that can come later. I am a writer. This window is my inspiration. The view out the window is my freedom. 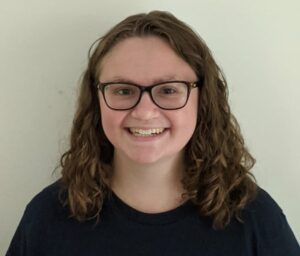 Madison Jackson is a Master of Fine Arts student in Creative Nonfiction Writing at Chatham University in Pittsburgh. She is the founder and Executive Director of the Global Jewish Pen Pal Program, a non-profit which matches individuals with Jewish pen pals around the world.