The History of the Allegheny County Courthouse & Jail

Armstrong County was named for Colonel John Armstrong. During the French and Indian War, the area was home to an Indian village that was notorious for launching raids on white settlers in western Pennsylvania, parts of Maryland, and Virginia. Colonel Armstrong led an attack with 300 frontier troops on the Indian village to put down their murderous raids. During what became known as the “Battle of Kittanning,” in 1756, the Indian leader, Captain Jacobs, was killed and Armstrong lost men, but the attack was successful in that it suppressed the Indian raids on the settlers.
Colonel Armstrong went on to represent Pennsylvania in the Continental Congress, and when the county was formed, they named it in his honor. 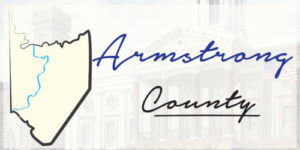 No, this town was not named for the space program. It was originally called Warren after Edward Warren, a Native American fur trader who lived there. Because there was another town in Pennsylvania by that name, when the post office opened there in 1848, the town became Apollo after the Apollo Iron & Steel Company, which was a chief employer there.

It’s location on the Allegheny River and the old Pennsylvania Canal made it a desirable location. Originally, known as Todd’s Town after the Todd family, the founders of the area, it acquired the name Freeport when David Todd, declared the place a “free and open port” meaning no one would be charged to tie up rafts, boats, or barges there.

The county seat of Armstrong County, Kittanning’s name comes from the Delaware Indian word Kit-han-ne, which loosely means the “main stream” as the village was situated on the Allegheny River.

In 1786, John Parker surveyed the land here and the settlement established there came to be known as Parker’s Landing. In 1873, it was formally incorporated as Parker.