If you’re new to Pittsburgh, you must have these things on your to-do list

The History Behind the Holiday: Independence Day 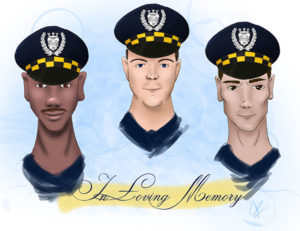 Richard Poplawski was born on September 12, 1986, and for all intents and purposes was born with the deck stacked against him. He continued to play that losing hand all the way to a death sentence for murder.  Poplawski’s life seems like a recipe for disaster that unfortunately led to the killing of officers Eric G. Kelly, Stephen J. Mayhle and Paul J. Sciullo III on April 4, 2009.

Poplawski was born to a 17-year-old mother, Margaret, and 32-year-old father, Richard. The couple was married only six months when their son was born. The marriage was a violent one and resulted in divorce in 1989. Both of his parents had records for drunk driving and frequently battled in court over unpaid child support.

For Poplawski, his downward spiral really began when he was in high school. He was asked to leave North Catholic high school in his junior year for undisclosed reasons. He joined the Marines but was discharged three weeks later after throwing a lunch tray at an officer. Once back home, his girlfriend filed a protection-from-abuse order against him after he allegedly roughed her up and threatened her. Like many mass murderers, Poplawski blamed others for his misfortune and began to write racist and anti-semitic posts on social media.

With his life going nowhere, Poplawski moved to Florida to attend school, but unfortunately that didn’t pan out. So, he moved back to Pittsburgh to live with his mother at her home in Stanton Heights. During this time, his online posting became increasingly vile, and he adopted two pit bull mixed dogs. It was over the dogs urinating on the carpet that an argument erupted between mother and son that fateful April day. It escalated rapidly, leading to his mother calling for the police.

In an unfortunate miscommunication, the 911 dispatcher failed to alert the responding officers that there were guns in the home, despite Margaret Poplawski revealing as much to the dispatcher when she’d called for help.

Nevertheless, Poplawski lay in wait– with multiple weapons– for the three Pittsburgh Police officers to arrive. The officers were gunned down as they entered the home. Poplawski was arrested four hours later after a standoff that resulted in Poplawski and three other officers being wounded.

The city was stunned by the violence and grief-stricken over the loss of life. Officer Paul J. Sciullo of Bloomfield was only 36 when Poplawski took his life. Officer Stephen J. Mayhle was 29, married, and the father of two young girls. Officer Eric G. Kelly, the veteran of the trio, was 41 and was married and the father of three girls. The fallen officers were honored by lying in repose in the City-County Building on April 8 and 9.

A little over two years later on June 25, 2011, Poplawski was tried and convicted on three counts of murder and 25 related charges. Although his defense presented mitigating evidence about Poplawski’s troubled upbringing and mental health, the jury sentenced him to death. In 2015, Governor Wolf put a moratorium on the death penalty, so Poplawski still sits on death row.

To date, there have been 91 officers who have died in the line of duty here since 1853. The slaying of Officers Sciullo, Mayhle and Kelly was worst in the history of the department. Their names are engraved on the Law Enforcement Officers Memorial of Allegheny County on the North Shore and serve as a somber reminder of that day when three of Pittsburgh’s finest lost their lives.