Andy Warhol: A Pittsburgher at the Core

The Best of Cambria County 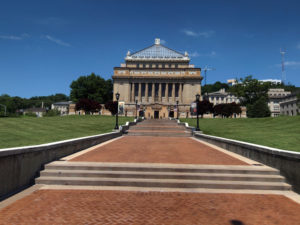 Soldiers & Sailors Memorial Hall in Pittsburgh’s Oakland neighborhood was founded to ensure that our soldiers and sailors and their selfless service never fade from our memories. The idea first came after the Civil War as the nation began to rebuild and heal. However, it would take around 50 years before the hall would be built and dedicated.

In 1906, land was purchased in Oakland on Fifth Avenue. Renowned architect Henry Hornbostel was retained to design the hall. Hornbostel had previously designed the buildings located in Carnegie Mellon University. He was trained in Europe and embraced the Beaux Arts style. It implemented the grand classic styles of architecture. He designed Soldiers & Sailors after one of the Seven Wonders of the Ancient World, the Mausoleum at Halicarnassus in Asia Minor.

In 1910, the hall was dedicated “in honor of soldiers, sailors and marines from Allegheny County who served in defense of the Union.” The stately hall’s operation was overseen by a board of Civil War veterans.

The hall was initially constructed to honor Civil War veterans. However, over the last century it expanded to honor those who serve in all branches of service and from all conflicts and wars. It holds a collection of artifacts and mementoes donated by those who have served since the Civil War. That provides a unique perspective on our military history. Those keepsakes also tell personal stories of those who served. It is the largest memorial hall in the U.S. dedicated to honoring all branches of military service and its personnel.

In 1967, Pittsburgh History and Landmarks designed Soldiers & Sailors as a historic Landmark. It is also listed on the National Register of Historic Places.

Visitors may tour four exhibit halls: the North, West, East and Front. Union soldiers refused to name a hall the “South hall” and instead dubbed it the Front hall. Each hall is packed with military paraphernalia, uniforms, and personal mementoes. There are two additional halls: The Gettysburg room traces the “Slave to Soldier” journey and artifacts from the Battle of Gettysburg. The Hall of Valor is dedicated to honoring Pennsylvanians who have received valor such as the Medal of Honor, Silver Star, Distinguished Service Cross, and the Distinguished Flying Cross.

The hall also houses a 2,300-seat performance auditorium. Nelson Mandela and President Donald Trump are among the notables who have spoken in the hall. Eventually the Civil War veterans turned over care of the hall to Allegheny County. After several decades it had fallen into disrepair. In 2000, Soldiers & Sailors became a nonprofit organization. Funds were raised which resulted in extensive renovations. This also caused some facilities to be opened to the public to be rented for occasions such as weddings.

The museum offers free admission to military members serving on active duty, and in the Guard and Reserve; to those veterans who have served and retired military. It also offered to families and their guests if the family has an immediate family member deployed overseas serving in our current conflicts.