The Walking Tour of the North Shore

There have been many famous twins over the years. From the 1960s Patty Duke Show to the Olson twins of Full House. The Monongahela Incline and Duquesne Incline is Pittsburgh’s famous twins. Twins might sometimes appear identical but their personalities, styles, and tastes are different. This is certainly true of “The Mon” and Duquesne Incline. This pair of inclines may appear to be alike, but they have evolved over the decades to acquire different personalities. Both were built in the 1800s. The Monongahela Incline, with stations located at 73 West Carson Street and 5 Grandview Avenue opened on May 28, 1870. It is the oldest continuously operating funicular railway in the country. The Duquesne Incline, with stations at 1197 West Carson Street and 1220 Grandview Avenue, opened nearly seven years to the day after the Mon Incline, debuting on May 20, 1877. Both are owned by the Port Authority of Pittsburgh. However, the Port Authority only operates the Mon Incline; the Duquesne Incline is operated by the nonprofit Society for the Preservation of the Duquesne Heights Incline.

Both inclines were built for the same reasons, but over the decades their functions have shifted somewhat. Today, the Duquesne Incline, which overlooks The Point, still transports riders in the original wooden cable cars but also houses a Pittsburgh history museum and gift shop. It has become more of a historical tourist attraction.

The Mon Incline has become the workhorse of the two. Its proximity to the touristy Station Square and swinging nightlife of nearby South Side makes it a destination for Pittsburghers and visitors. 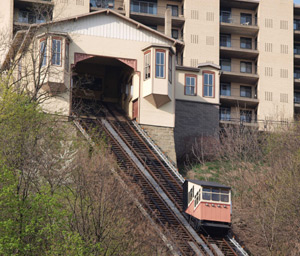 As Pittsburgh’s three rivers attracted settlers, the steep hills in the area became more of a problem for commuters. Cars were far in the future so most people walked to work. Steep pathways were the only means for ascending and descending the hills. Making the paths or roadways unsafe. especially the Coal Hill area, which was Mt. Washington’s previous name.

Luckily, many of those living on Coal Hill were German immigrants who were accustomed to their mountainous homeland. These German engineers proposed that the city build a series of cable cars(seilbahns) or incline planes for transportation.

By the mid-1800s plans to build inclines started but with the outbreak of the Civil War the plans stalled. When war ceased, many of the area’s most noted industrialists took up the idea. Names such as Westinghouse, Carnegie, Mellon, and Jones lent their support to the project.

Civil engineer J.S. Kirk selected two desirable sites for constructing this new form of transportation: the Southern near the Smithfield Street Bridge (which became the Mon Incline) and the Western near the confluence of the rivers (which became the Duquesne Incline). The Southern site was ultimately selected for the city’s first of 17 inclines. It was chosen because it offered the most access to the entire city. 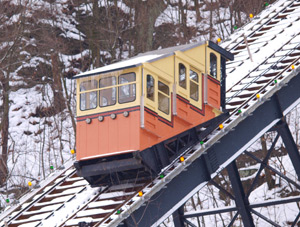 J. J. Endres, a native of Prussia, was the engineer in charge of the Mon Incline project. He was assisted by the young engineer Samuel Diescher. Diescher was born in Budapest and educated in Germany and Switzerland. Endres had a daughter, Caroline, who was highly educated in Europe. She also helped assist with the Mon Incline’s construction. it was the talk of the town when word got out that a female engineer was assisting with the project. In was a highly unusual  occupation for a woman in those days. The curious traveled to the Endres home to gawk and suitors flocked to court Caroline. In the end Caroline married Diescher and with her help, he became one of Pittsburgh’s most successful engineers He designed many of the city’s other inclines as well as ones all over the United States.

The Monongahela Incline is 635 feet long and rises 367.39 feet with a grade of 35 degrees. Each car holds 23 passengers and travels at a rate of 6 miles per hour. It cost $50,000 to build, and opened the Mt. Washington area to greater development. In 1964 the Port Authority took over the upkeep of the Mon Incline. The Pittsburgh History and Landmarks Foundation declared it a historic structure in 1970. Over the decades, the Mon Incline has had four major renovations, including one to make it wheelchair accessible. 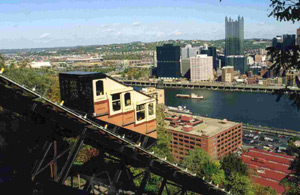 Kirk’s selection of the area where the Mon Incline was built has proven to be quite prophetic. He reasoned that building the first incline near the end of the Smithfield Street Bridge would offer access to more people. he was correct and that’s still the case today. More than 1,500 commuters use this unusual form of mass transportation on weekdays. That ridership doubles on weekends with sightseers. It is estimated that after 100 years of operation, nearly a half million riders have taken the Mon Incline. With the incline nearing its 150th birthday, that number will continue to soar and solidify the Monongahela Incline as an integral part of Pittsburgh’s transportation system and history.