The Mystery of the B-25 Bomber

You Need a Team When Buying or Selling a Home 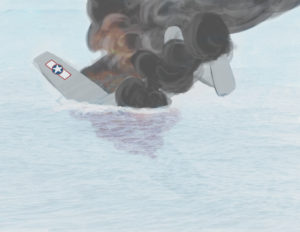 The mystery of the Bermuda Triangle and the peril it posed is well known. Pittsburghers are intrigued about the legendary area where ships and planes inexplicably disappeared. However, many may not have realized that we may have our own Bermuda Triangle right here in Western Pennsylvania.

On January 31, 1956, a B-25 Bomber crash-landed into the Monongahela River, and the plane was never to be seen again. Major William Dotson and his five other crew members were flying from Nellis Air Force Base in Nevada to Olmstead Air Force Base in Harrisburg, Pennsylvania. They were to pick up a cargo of airplane parts. What was to be a routine flight ended in death, disaster, and mystery. This gave birth to the legend of the Ghost Bomber.

The plane exhibited no mechanical difficulties. It had refueled at Tinker Air Force Base in Oklahoma and again at Selfridge Air Force Base in Michigan. However, before the plane reached its destination, the crew reported that it was losing fuel. Near 4 p.m., Major Dotson requested permission to land at Greater Pittsburgh Airport. Once he realized they wouldn’t make it, he requested to land at Allegheny County Airport .

At 4:11, the plane ran out of fuel and the engine malfunctioned. This gave Major Dotson no option but to land in the Monongahela River. Eyewitnesses saw the bomber glide over the Homestead High Level Bridge and splash-land near the Glenwood Bridge in Hays.

Everyone on the plane survived the crash-landing. They then climbed up to the upper area of the aircraft as it drifted downstream. It’s reported that the plane stayed afloat for 10-15 minutes. As it began to sink, the crew members swam to nearby floating logs and the shoreline. Sadly, two members sunk beneath the frigid river water, most likely succumbing to hypothermia. The bodies of Capt. Jean Ingraham and Staff Sgt. Walter Soocey were not recovered until months later. Although the U.S. Coast Guard and Army Corps of Engineers dragged and dredged the river for 14 days after the crash, the plane was never seen again.

The crash happened during the Cold War era when espionage, conspiracies, and “duck and cover” drills were practiced in case of a nuclear attack. This caused rumors about the plane to ran rampant. Some believed that the plane was carrying nuclear weapons or aliens from a UFO. There was gossip that the government had quickly removed the plane to cover its tracks. Others think that the polluted water in the Monongahela River eroded the plane in the decades since it sank. Still others have speculated that the plane sank into a gravel pit, and 40 years’ worth of sediment filled the pit and buried the plane.

In 1995, the B-25 Recovery Group was formed. For nearly three decades they have conducted scientific and physical investigations. Despite all their effort the pane has not been recovered. They believe it rests in pieces under silt near “Bird’s Landing”. This is near the original crash site in Homestead. They remain hopeful of someday recovering the plane. However, some would like the plane to remain unfound.. leaving an air of mystery in our murky waters.