By the conclusion of World War II Pittsburgh was looking a bit shabby.  Corporations found it increasingly difficult to lure talent to the city.  Consequently, many corporations threatened to leave the area.  Fearing an exodus, the city leaders deemed that Pittsburgh needed a facelift, a “renaissance.”

To kick off this major urban renewal, later known as Renaissance I, the urban planners went back to the city’s birthplace: The Point.  Located at the tip of the Golden Triangle, which is formed by the confluence of the Allegheny and Monongahela Rivers, this area was filled with run-down buildings, railroad tracks, an auto tow pound, vacant lots, and tons of litter.  The dilapidated buildings were razed and the trash hauled away, leaving a park that has since become the heart of the city and a communal gathering place.

Adjacent to The Point, a new development was constructed called Gateway Center.  In 1952 the four buildings hugging The Point that make up Gateway Center were opened.  These sleek skyscrapers were vastly different from the grand, opulent buildings constructed in previous decades by the city’s industrialists.  The next major portion of this renewal occurred further up the Golden Triangle in what is now known as Mellon Square. Originally a residential area, Mellon Square opened in 1955 as the city’s first green space.  It is the nation’s oldest park/parking garage complex and was listed as a National Historic Place in 1985.  Mellon Square’s modernistic triangular paving and asymmetrical arrangement of planters and fountain further helped to establish Pittsburgh as a forward-thinking city.  Surrounding the square were the Alcoa Building, Koppers Building, and William Penn Hotel. 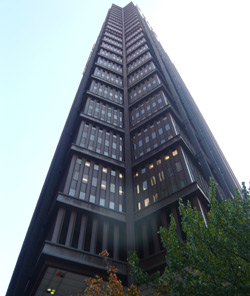 While Renaissance I established a break with Pittsburgh’s past, Renaissance II set off a building boom and radically changed the city’s skyline.  Renaissance II began in the late 1970s and lasted until approximately the early 1990s.

Pittsburgh’s tallest building was erected during this period.  The U.S. Steel Building, 600 Grant Street, was completed in 1970 and was the headquarters for U.S. Steel Corporation.  At 64 floors, it is the fourth tallest building in Pennsylvania and the 37th in the nation.  Architecturally, it is noted for its triangular shape and its Cor-ten steel exterior.  Made by U.S. Steel, Cor-ten was a new product that resisted meteorological corrosion, forming a dark brown oxidation over the metal, which required little or no maintenance.  UPMC is now headquartered in the U.S. Steel Building, and in 2008 UPMC installed its initials atop the building.

In 1982, Oxford Center was opened on Grant Street.  The 45-story aluminum and glass octagonal towers brought a modern look to this historic area of the city, which is home to the Allegheny County Courthouse.  The Atrium provides a grand entry way to the complex which houses retail, office, and dining facilities. 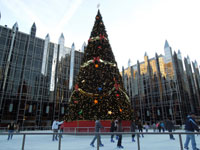 Melding Pittsburgh’s past architecture with modern materials and design elements, PPG Place looks like a castle from the Land of Oz.  The six-building complex was designed by architects Philip Johnson & John Burgee.  It was built between 1981 and 1984.  The center point is the 40-story tower.  Fittingly as the headquarters for a corporation known for its glass products, PPG Place is constructed of reflective glass.  Gothic influences, inspired by the University of Pittsburgh’s Cathedral of Learning, are evident in the towers and 231 pinnacles topping the buildings.  The complex also showcases the Wintergarden, an enormous solarium, and an outdoor plaza.  In the winter, The Rink at PPG Place opens for ice skating enthusiasts.

EQT Plaza, formerly CNG Tower and later Dominion Tower, was completed in 1987 and is 32-floors tall. Located at 625 Liberty Avenue, its architecture hearkens back to the Art Deco style of the Gulf Tower and Grant Building.  Its towers are topped with distinctive, graceful arches.

Fifth Avenue Place was completed in 1988.  Located on the site of the former Jenkins Arcade, at the corner of Fifth and Liberty Avenues, Fifth Avenue Place has 31 floors and its major tenant is Highmark Blue Cross Blue Shield of Pennsylvania.  It is chiefly constructed from Spanish pink granite, and the top of the building forms a pyramidal shape.  Soaring from the top of the skyscraper is a 178-foot tall mast.  The height of the mast indicates the intended height of the building before the city deemed that too tall for the skyline.

In 2002, Alcoa moved from the Golden Triangle across the Allegheny River to the North Shore. This six-story office building hugs the river bank and is adjacent to the numerous dining and entertainment complexes located there.  It was designed with an open office space concept and oversized floor-to-ceiling windows that allow natural light penetration and views of the river and city skyline.

The David L. Lawrence Convention Center was built in 1981 but was completely redesigned and reopened in 2003.  It is situated on the southern shore of the Allegheny River at the head of the Strip District.  It is a colossal hall at 1.5 million square feet.  Its wall of glass overlooks the Allegheny River and affords gazers a spectacular view of the North Shore including PNC Park and Heinz Field. A water feature bisects the building and leads to the Allegheny River.  In 2011, the convention center’s Riverfront Plaza was opened.

Pittsburgh’s skyline is never static.  In fact, PNC recently announced that it has purchased properties at the corner of Fifth Avenue and Wood Streets in order to construct a 40-story headquarters for the expanding financial institution.  Construction is slated to being in spring of 2012 and the headquarters is forecasted to be completed by the summer of 2015.