The Best of Lawrence County 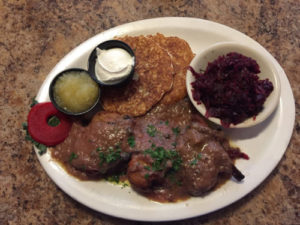 Occasionally, I have consumed and, more often than not, enjoyed German food. From sandwiches with Bratwurst, Weisswurst or Knackwurst to Sauerbraten and an assortment of Schnitzels, I am not a stranger to German fare. But one famous German dish that I have been tempted to order but have shied away from is Hasenpfeffer. I like to be a little adventurous when dining out; I enjoy trying things for the first time. However, for one reason or another, when it came to eating this rabbit dish, I always found reasons to order something else. Anything else.

I ordered my first Hasenpfeffer recently at Max’s Allegheny Tavern. I didn’t plan on ordering it, but a minute before our waitress came for our order, I heard a fellow diner raving about the dish. It was now or never. I was fairly sure I wanted it because of the unrequested review from a guy I had never met and because all the meals that I have had at this North Side landmark restaurant were good. I felt that I was in for a real treat. While ordering, I asked our waitress if it was a very popular dish. She replied that she had a number of diners that ordered it regularly. When I asked this veteran server how often she had Hasenpfeffer, she admitted that she hadn’t gotten around to trying it yet.

In any case if you’re a Hasenpfeffer fan, I trust that the rabbit served at Max’s Allegheny Tavern will please you. If you see me there, I’ll probably be enjoying a Schnitzel.