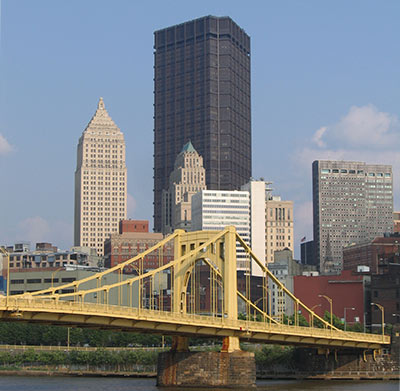 The Gulf Tower was originally built as the headquarters for the Gulf Oil Company in 1932. It is located at 707 Grant Street downtown. Originally that location was the site for the first oil refinery in the United States. Samuel M. Kier had built a refinery along Seventh Avenue. It helped develop the petroleum industry. The tower was designed by Trowbridge & Livingston and was constructed at a cost of $10.5 million. Today that would translate to roughly $140 million. The building rises to a height of 582 feet with 44 floors and fifteen elevators. The top of the building was modeled after the Mausoleum of Halicarnassus’s step style pyramid. The top six floors that make up the step pyramid were designed to feature a display of current weather conditions. It used the blue and orange of the Gulf Corporation’s brand.

The Gulf Tower survived through Pittsburgh’s polluted history. However, it needed to be sandblasted to remove the thick layers of grime that coated the building once the city’s air quality began to improve.

The 1970’s were an important time for the Gulf Tower. It was Pittsburgh’s tallest building from 1932 until 1970. When the U.S. Steel Building was completed it became the tallest in our city. In 1973, the Gulf Building was listed as a Historic Landmark by Pittsburgh History & Landmarks.

A bomb was detonated on the 29th floor on June 13, 1974 at 9:41 pm. The Weather Underground Organization took credit for the attack. They claimed it as their protest to Gulf Oil’s financial involvement in the Portuguese colonial war against the people of Angola in Africa. At the time of the bombing the building was already under strict security. The incident left a lasting fear, which led to intensified security measures. It was also during the energy crisis of the late 1970’s that the Gulf Corporation discontinued the weather beacon that had been a downtown attraction for nearly half a century.

One of the most remarkable things about the Gulf Tower is that it has become home to the Peregrine Falcon. It was one of the first species listed under the U.S. Endangered Species Act of 1974. The peregrines saw a drastic decline in the 1960’s due to pesticides like DDT causing what was referred to as “pesticide raptor syndrome.” Female peregrines laid thin and weak eggs that often broke during incubation. A recovery program was introduced in 1970. By 1999 the falcons were removed from the national endangered species list due to their successful recovery in the west. They have not fully recovered in Pennsylvania and remain on the Pennsylvania Endangered Species list. 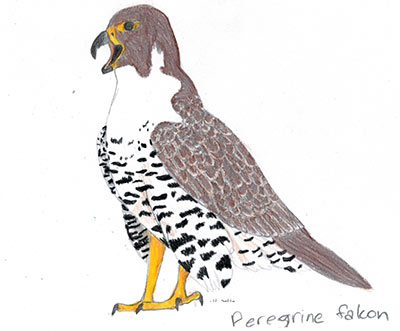 Peregrine Falcons were first seen in Pittsburgh during the winter of 1989-1990. Two falcons that had been raised in captivity and released into the wild found their way to Pittsburgh. In April of 1990 the Western Pennsylvania Conservancy (WPC) discovered them hunting smaller birds around downtown. The WPC wanted to find a suitable nesting place for the falcons in the city. The management of the Gulf Tower was the first to allow the WPC staff to construct two nesting boxes on an upper balcony of the building in January of 1991. The peregrines immediately began nesting at the Gulf Tower and the building has hosted a pair each year since then. It is considered to be one of the most productive peregrine falcon nesting sites in Pennsylvania.

On July 4, 2012, Gulf Tower owners Rugby Realty dedicated the new KDKA Weather Beacon. The weather beacon is a revamped version of the original weather display. The colored lights on the top floors represent temperature, precipitation, humidity, and wind speed. It will also change colors for holidays and important Pittsburgh sporting events. Installation of the new lights caused the peregrine falcons to relocate their nest to 322 Fourth Avenue. However, in March of 2014 they officially returned to the Gulf Tower when the female laid her first egg there.

The Gulf Tower has been an identifying part of the Pittsburgh skyline since its completion in 1932. It has endured some dramatic moments in Pittsburgh’s history, and it continues to play a vital role in what makes this city unique.