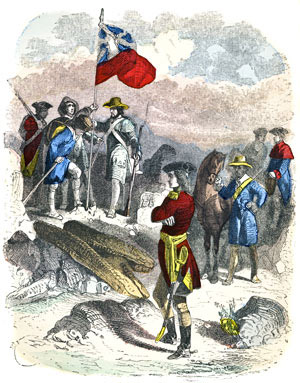 In 1753 George Washington decided that “the Point” is an ideal place for a fort. At this time, Marquis Duquesne, who was the governor of Canada, was planning to seize the Ohio Valley for the French. He planned to construct a fort at the Point. Washington and the English retaliated. Captain William Trent arrived at the Point in 1754 and immediately began to construct a fort. It was named Fort Prince George, but is more commonly known as “Trent’s Fort”. It was the first fort built at the Point.

In April of 1754, the French and Native Americans arrived at the half-finished fort by canoe and demanded the surrender of Trent’s Fort. The fort was under the command of Ensign Ward who had no choice but to surrender. He was permitted to take his men and tools with him. The French began to construct Fort Duquesne.

The British struggled for a number of years to regain the land at the forks of the Ohio River. It wasn’t until November of 1758 that the French found themselves outnumbered and preemptively set fire to Fort Duquesne before General Forbes captured the site. General Armstrong raised the British flag over the ruins of Fort Duquesne. He announced that Forbes had declared the name of the land to be Pittsburgh as a monument to William Pitt, the Prime Minister of England.

Forbes was in poor health and left for Philadelphia after successfully capturing Fort Duquesne. Colonel Hugh Mercer was left in command with the orders to construct Fort Pitt. He first built a temporary fort to hold the location in case the French returned. This fort was known simply as “Mercer’s Fort”. Fort Pitt was built next to the site of Fort Mercer in 1759.

During the summer of 1763, Pontiac’s Rebellion found its way to Fort Pitt. The Native Americans were able to come up the sides of the ditch that surrounded Fort Pitt when the moat dried out and shoot the guards. Captain Simeon Ecuyer was in command of the fort at the time. There had been a recent outbreak of smallpox that threatened the British as much as the Native Americans. Ecuyer offered the Native Americans a gift of blankets and a handkerchief from the fort’s smallpox hospital, hoping to infect and weaken them.

Colonel Bouquet assessed the weaknesses of the fort after Pontiac’s Rebellion. He ordered the building of a redoubt that could command the moat located on the Allegheny side of the fort. The redoubt was constructed out of brick and stone with portholes in the walls in order to allow soldiers to shoot at their enemies. An underground passage connected this structure to the fort.

The Release of Fort Pitt 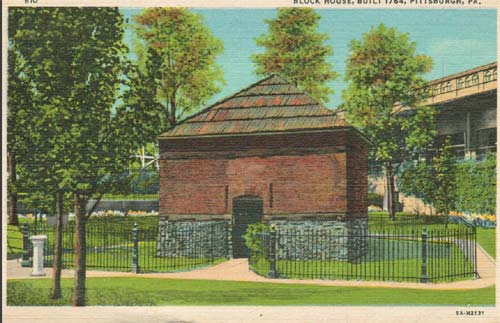 The British released Fort Pitt to the colonists in 1772 after establishing peace with the Native Americans. The fort became an important location as Virginia and Pennsylvania fought for the land. Virginians took over the fort and renamed it Fort Dunmore in honor of their governor, Lord Dunmore. The fort played a crucial role in Dunmore’s War in 1774. The U.S. Army later decommissioned the site in 1797 and auctioned off all salvageable remains. Many Pittsburgh residents used bricks and pieces from the former fort to construct their own homes. The blockhouse was not torn apart, as it was located outside of the fort. It was transformed into a tenement, using bricks from Fort Pitt to construct the annex.

The blockhouse served as a home until the late 1800’s. It saw a variety of residents throughout its time. In 1784 Isaac Craig and Stephen Bayard were the first owners of the land. James O’Hara purchased the land in 1802 and it remained in his family until his granddaughter, Mary Schenley, donated the blockhouse to the Daughters of the American Revolution in 1894.

The Point neighborhood began to deteriorate by the late 1800’s and became known as skid row. It took a lot of work to clean up the damage that had been done to the Blockhouse and the surrounding area. The DAR removed the annex connected to the blockhouse and made many repairs to the structure. They added an iron gate and improved the landscape of the area before opening it to the public as a museum. It still operates to this day, a lone reminder of Pittsburgh’s revolutionary past. The only other remnants of that time are the streets and places named for the people who played key roles in the military history of the land. 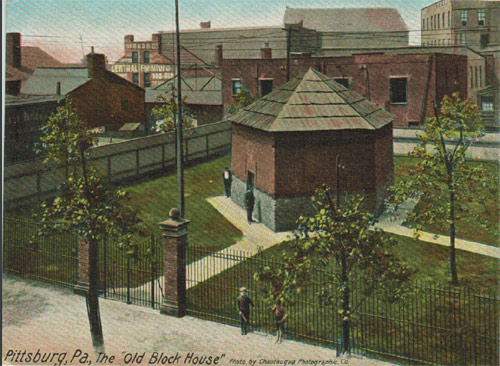 Henry Clay Frick offered the Daughters of the American Revolution $25,000 to relocate the blockhouse to Schenley Park in 1902. They refused the offer. It was taken to the Supreme Court and ultimately settled in the DAR’s favor. Warehouses and railroads surrounded the Blockhouse by the 1930’s, burying the landmark in the smoky clouds of Pittsburgh’s pollution. A project to build a park at the Point helped clear up traffic, reduce pollution, and preserve the history of the site. The state purchased and acquired nearly all the land for the park in 1949. Point State Park was completed in August of 1974. The blockhouse remains at its original location in the Golden Triangle. It was also added to the list of National History Landmarks in 1960.