The Importance of a Needs Assessment for PCTV

You don’t have to dig very far to come up with a tunnel in Pittsburgh. We have short pedestrian tunnels, railroad tunnels, major traffic tunnels, and everything in between. Our bridges get a lot of attention, but our tunnels are just as important for getting around. Any tunnel shutdown ensues in a traffic nightmare. As if Pittsburgh traffic could get any worse.

There are too many tunnels in our area to list, but here is a rundown of the major ones:

The Liberty Tubes are the oldest tunnels in Pittsburgh. At one time, they were the longest automobile tunnels in the world with a length of 5, 889 feet. Workers broke ground on the tunnels in December of 1919. Excavation crews took nearly four years to blast away more than 400,000 tons of rock and dirt to build the tunnel. They finally opened on March 23, 1924, and provided cars as well as horse-drawn wagons with a direct link from Downtown Pittsburgh to the South Hills. Previously, travelers would have to travel around Mt. Washington via the West End. The name came from a hope for lasting peace after the Allied victory in World War I.

The opening spurred an economic expansion in the South Hill, where real estate prices soon soared, and housing developments proliferated. Unfortunately, five months after the tunnels opened, traffic congestion inside it caused a buildup of carbon monoxide. The incident necessitated the quick installation of a ventilation system that continuously pumped fresh air into the tunnels.

In 1938, the city built a jail cell at the north end of the tunnel to lock up any law violators caught trying to escape the area. Most of those apprehended were nabbed for public drunkenness, and the tunnel jail gained as reputation as a “drunk tank.” 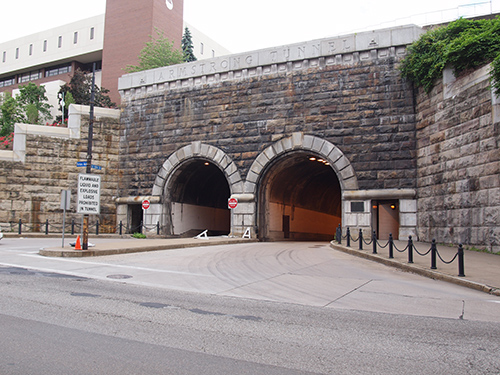 The Armstrong Tunnels opened in 1927, connecting 2nd Ave to Forbes Ave via the bluff where Duquesne University is situated. The connection was proposed after Pittsburgh annexed the town of Birmingham—now the South Side—in 1872. Yet, the city did not begin construction until 1926. The tunnels’ namesake is Joseph G Armstrong, the Allegheny County Commissioner at the time of their construction,

The tunnels are unusual in that they have a 45-degree bend in them. Legend has it that the bend was a mistake by engineer Vernon Covell. However, most people believe it was a purposeful design so as not to disturb buildings above. Another oddity is the pedestrian walkways present on each side.

Construction began on the tunnels in 1946 and opened for traffic on June 5, 1953. Ever since, these tunnels have been a vital part of the Parkway East. The Squirrel Hill Tunnels are the second largest in Allegheny County at 4,225 feet. Unsurprisingly, they pass under the Squirrel Hill neighborhood. The city built the tunnels to accommodate traffic between the city and the suburbs after World War II. Observant drivers will notice that there is an office space above the tunnels. Originally, workers monitored the the traffic from there; today, the space is primarily storage. 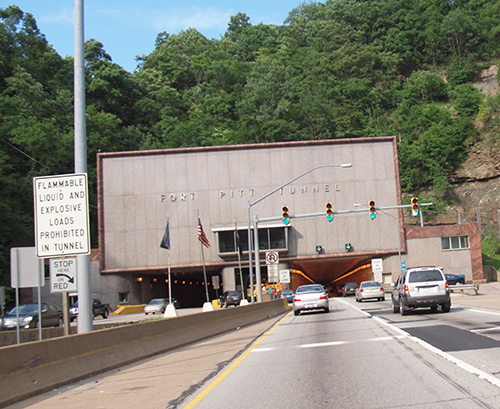 The Fort Pitt Tunnels are noted for being the threshold for a spectacular view. The sight of the Golden Triangle as travelers emerge from the tunnel is “the best way to enter an American city,” as described by the New York Times.

The Wabash Tunnel opened as part of the Wabash Pittsburgh Terminal Railway in 1903. Workers excavated the tunnel through Mount Washington to connect the railway to downtown. Unfortunately, the railway went into bankruptcy four years later, and the tunnel fell into sporadic use.  It closed in 1946 after suffering a landslide and fire. In the 1970s, the Port Authority included the tunnel as part of their ill-fated Skybus project. They also included it in the West Busway project, but that plan fell through. Finally, this ugly duckling opened in 2004 as a High Occupancy Vehicle accessway. The tunnel and the ramp serve as a one-way road. The traffic flow is reversed to accommodate differing traffic flow patterns.

Tunnels are dark and confining, and don’t provide the views that bridges do, but nevertheless they are an integral part of our traffic system and are an essential element of what makes Pittsburgh so special.