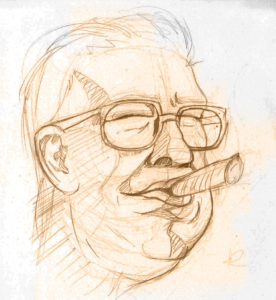 Art Rooney Sr. was referred to as “The Chief” for being the man who founded the Pittsburgh Steelers. Interestingly Three Rivers Stadium was built where Art Rooney’s childhood home once stood.  That same spot is also where he got his nickname. Not many people have one spot that makes such a large impact on their lives.

Art Rooney was born in Coultersville, just east of Pittsburgh. His family made their living as coal miners and steel workers.  His parents moved their nine children to Pittsburgh when Art was very young.  There they lived above his father’s bar.  It was a tough neighborhood but it wasn’t all bad.  There were plenty of youngsters in the neighborhood. The kids in those days played baseball, basketball and football from morning to night and enjoyed boxing as well. Mr. Rooney loved sports from a young age.

Some say that the money Art used to invest in his own team was earned in an unconventional way. It is said that Art frequented the race track and some of his winnings went to his pro football team in the early years.  Some believe his betting wins possibly financed his NFL franchise purchase.

Art owned several semi-professional sports teams over the years in Pittsburgh.  He was able to bring his football team into the National Football League after purchasing the franchise in 1933 for the sum of $2,500.  He decided to make the franchise purchase after the Pennsylvania “Blue” Laws were voted out.  The Blue Laws prohibited doing much of anything on a Sunday, including playing professional football.

Art’s love for baseball shined through when he first named his professional football team the Pirates.  It could be confusing as there was already a professional team with that name in Pittsburgh. In 1941, the team opted for new uniforms and a name change.  Pittsburgh was the steel capital when Art famously responded to a newsman’s inquiry about what he thought of his team: “They look like the same old Steelers!” 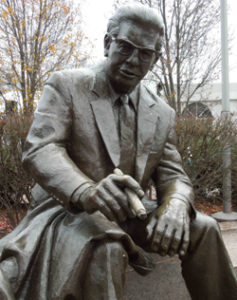 Fame and glory did not come to the Pittsburgh Steelers quickly and the “same old Steelers” line followed them for a long time. As Art said: “We lost so often that you didn’t feel like going out in the daytime.  You ducked your friends.  You went up and down alleys to get to your office.  Everybody asked you the same thing, ‘What happened?'” It wasn’t until their 42nd season that they claimed their first championship by winning the AFC Central Division Title.

Art married Kathleen McNulty in 1931. They remaining together for 51 years until her death in 1982.  Together they had five sons, Dan, Arthur Jr., Tim, John, and Pat.  Each son proudly became involved in the family businesses. Either the Steelers franchise, Mr. Rooney’s race tracks, or another of the family enterprises.

Any time Mr. Rooney paid a post-game visit to the Steelers’ locker room, the players would stand out of resect.  Art Rooney was known as a man who made everyone feel as though they had his undivided attention. Art was respectful and kind to all people. Whether they were famous politicians, entertainers, doormen or the members of the ground crew at Three Rivers Stadium.  He was known for writing notes to coaches and players’ families as well. He was truly a friend to all.

Once, Art wrote to a coach who had just signed a former Steeler, telling him what a fine young man he had joining his program.  He also wrote a note to a mother of a player who was traded soon after joining the team, telling her he was proud her son was part of the team for the time he was there.  Only someone special would go that extra mile.  Those notes were treasured by those lucky enough to receive them.

Sports wasn’t the only circle of fame that Art Rooney traveled in.  Mr. Rooney was as well known in political circles as he was in his home parish church, St. Peters Roman Catholic Church on the North Side.  In his later years, Mr. Rooney was at a dinner with the bishop and other church dignitaries.  Mr. Rooney, being the proud man that he was, wanted to join the line to pay his respects to those at the main table.  He struggled to get up, refusing assistance, only to find that the bishop and dignitaries came over to him.

Mr. Rooney was the ultimate “Proud Pittsburgher” who never forgot where he came from and made all those around him feel as important.  He once said, “If you ask a Pittsburgher where some place is, he’ll stop and tell you, and if he has nothing to do, he will take you there.”

When many picture Art they see a gray-haired, cigar smoking gentlemen. In his later years he was also known for being the kindest and most charitable sports team owner who said that “losing is a terrible thing.”  Art Rooney was a winner in life, both in the sports world and in his private world.  He will forever be a winner in Pittsburgh.