The motto of St. Benedict Academy is “ora et labora”, Latin for “pray and work.” Benedict, the patron saint of Europe, was a monk who lived 1500 years ago. he was born in Nursia and educated in nearby Rome. However, he soon became repulsed by the decadence he found there. Desiring to serve God, he retreated for several years to the mountains at Subiaco to live as a hermit. After that he traveled to Monte Cassino and founded the monastery that established the monastic tradition in the West. While at Monte Cassino, Benedict wrote a book of precepts for monastic living. It would come to be known as the Rule of St. Benedict. Benedict had a twin sister, Scholastica, who also dedicate her life to God. She founded a convent at Plombariola, a mere five miles from her brother’s monastery.

The influence of Benedict has continued throughout the intervening centuries, and his concept of glorifying God through prayer and work has had a major impact on the Pittsburgh area. During the middle of the 1800’s, a large number of German immigrants came to Western Pennsylvania. In 1852, Benedictine Sisters left their sheltered home of St. Walburg Abbey in Eichstatt, Bavaria. Their goal was to educate and benefit the children of these German pioneers. The sisters settled in St. Mary’s of Elk County, Pa. In 1870, the Diocese of Pittsburgh, whose boundaries then included Johnstown and Carrolltown, Pa., invited them to come to the Pittsburgh area. In 1875, they were invited to teach in the City of Pittsburgh, where they began St. Mary’s School on the Northside. As the community grew, the sisters purchased property on Canal Street. The building was remodeled, and they added a chapel and academy to their new motherhouse. In 1879, the academy was incorporated as St. Benedict Academy. 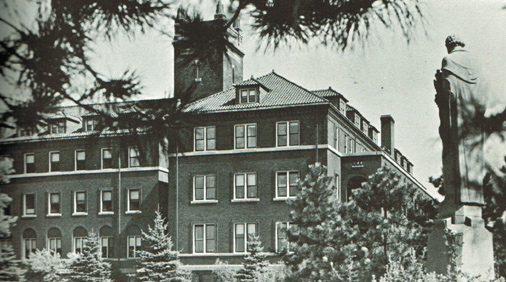 Reflecting that principle, St. Benedict’s curriculum included: philosophy, astronomy, sciences (both natural and social), languages (French, German, Latin, English, Rhetoric, Literature, Elocution), mathematics (geometry and bookkeeping), and extra cultural courses such as music, painting, and drawing. As enrollment grew the need for a Day School arose. It was for parents who weren’t inclined to send their daughters to a boarding school.

In 1923, a fire struck the motherhouse and academy forcing the sisters to relocate their monastery and St. Benedict Academy. In 1927, the Benedictine Sisters moved to their present location on Perrysville Avenue in Ross Township. The 22 girls enrolled in September of 1931 re-established school, located inside the motherhouse. In 1935, the school received state recognition and graduated its first class.

The school, now firmly established, changed its name back to St. Benedict Academy when it was incorporated in Harrisburg. During the early 1940’s, the enrollment increased to 320 students and quickly outgrew its area in the monastery. The first Parent-Teacher Guild was formed in1947. It began to organize construction of a separate building to house the school. Funds were raised, land was purchased, and by 1950 the new St. Benedict Academy was completed. The summer prior to its opening, the sisters acquired and refinished desks. Forming a human chain, they transferred the desks, chairs, tables, and other supplies to the school in order to be ready to receive students. In the early days, only sisters taught in the school, but by the 1960’s, lay teachers were also on staff.

The curriculum was always being changed to provide the very best educational courses to meet the needs of the students. A fully accredited high school, St. Benedict offered a curriculum on par with the public high schools of the area. It had three tracks: Business Education, College Preparatory, and General Education. Unfortunately, during the early 80’s, enrollment began to dwindle, and in 1985, St. Benedict Academy closed. It had educated well over 6,000 women. St. Benedict Academy provided an educational and spiritual foundation for women who would accept positions in government, science, medicine, education, business, religious life, and in the home.

The St. Benedict Academy Alma Mater begins with the lines: Time’s abiding finger, writes memories that linger. When those lyrics were written back in the early days of the academy, no one knew how prophetic they would prove to be.

Although the academy has been closed for three decades, the bond uniting the alumnae to the school, the sisters, and the tradition of St. Benedict remains. In March 2008, The Blue and Gold All School Reunion welcomed former students back to the school. Several groups of alumnae continue to meet, and the lifelong friendships forged under the aegis of the Sisters of St. Benedict Academy will last for years to come.

When the school closed, a collaborative relationship with several non-profit organizations was formed enabling continued use of the school building. Recently, after an extended period of discernment, the sisters decided to sell all of their property and build a smaller, more efficient monastery in Richland Township. They moved into their new home in 2013.

No matter where the sisters call home, they will carry with them St. Benedict’s Rule and his call to prayer and work.