The most striking aspect of the Flight 93 Memorial is how isolated and hauntingly quiet the crash site is. The stillness almost has a physical presence. It packs a profound emotional experience. It’s located only 60 miles southeast of Pittsburgh in Stonycreek Township, near Shanksville, Pennsylvania. 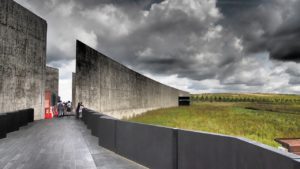 On the morning of September 11, 2001, four commercial airliners were hijacked in the United States. Two of the planes were flown into the World Trade Center in New York City, and a third struck the Pentagon in Arlington, Virginia. The fourth plane, United Flight 93, a Boeing 757, was delayed for 25 minutes before taking off from Newark, New Jersey. That delay possibly saved scores of lives, and the nation, from unthinkable consequences.

At 9:28 a.m., while cruising over eastern Ohio to San Francisco, hijackers stormed the cockpit, overpowered the flight crew, and commandeered the plane. The hijackers turned the plane around, skirting the Pittsburgh region, heading toward what many have concluded to be their actual target: the U.S. Capitol.

On board, the passengers of Flight 93 called family and authorities to report what was happening on their plane. 13 people made 37 calls. They were subsequently informed of the World Trade Center and Pentagon attacks. The passengers realized that their flight was also a part of the attack, and decided to rush the hijackers and attempt to retake the plane.

From the cockpit voice recorder that was recovered from the smoldering crash site, it was learned that at 9:57 a.m., with the words “Let’s Roll!” the brave passengers fought back against the hijackers and struggled with them for control of the plane until 10:03 a.m. The aircraft then flipped upside down and slammed into the Pennsylvania countryside at 563 m.p.h., leaving a crater 8-10 feet deep and 30-50 feet wide. All 44 people on board were killed.

The plane crashed within 18 minutes flying time from Washington, D.C. The heroic actions of these ordinary citizens foiled the hijackers’ plot and averted further calamity.

An impromptu memorial soon sprang up at the site in the sad days that followed. In 2002, by an Act of Congress, plans for a permanent, more-fitting memorial, were set into motion. After clashes over the design and legal wrangling to acquire the property, the Flight 93 National Memorial was dedicated on September 10, 2011, a day before the 10th anniversary of the attack. 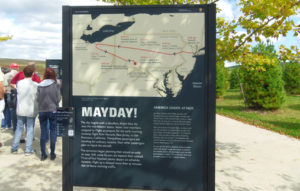 Upon arrival at the memorial, visitors will find ample parking and a venue that is handicapped accessible. On the walkway to the Visitor Shelter, there are large placards placed that recount the events leading up to Flight 93’s crash. The site is interactive, and those with cell phones can make it a self-guided visit by dialing a number to receive further information on their phones about the exhibits. Inside the Visitor Shelter, there is a black wall where visitors can pen notes and post them. The sentiments are touching.

Outside the Visitor Shelter on the right are rows of benches that face the crash site and where National Park Service personnel periodically give presentations. Beyond that is the Memorial Plaza, a wide walkway that leads to the Wall of Names. The walkway on the left is bounded by a low, black wall that delineates the edge of the crash site.

At several locations in the wall are notches where visitors tend to leave mementoes. At the end of the Memorial Plaza is the Wall of Names. Etched in bronze on white granite slabs are the names of the people who perished that day. Each person has their own slab, some having mementoes left at their base. On the day we visited, three weeks after the anniversary of the attacks, some mementoes left behind included a “World’s Greatest Grandma” mug, a small Air Force plane, flowers, military medals, and pictures, which drove home how great and personal the loss of life was of the 40 passengers and crew.

The Wall of Names rests in the direct flight path taken by the plane over the Pennsylvania terrain. To the left, at the far end of the gleaming wall behind a small partition, visitors will find a gate. Hewn from rugged wood, this slatted gate blocks visitors from the impact place, which is marked with a large boulder. The wilting flowers from the anniversary commemoration still decorated the boulder the day we visited. The 40 passengers’ and crews’ remains are still in that field, making it their final resting place. The only people allowed beyond the wooden gate are the victims’ loved ones.

Peering between the slats of the gate and seeing the boulder in the distance, it seems as though it is the border that separates life from death, and that if you are very quiet and still, you can almost hear the voices of the victims.

Only one other structure is visible from the memorial site: a red wooden building on a faraway hill. A meadow of wildflowers and the surrounding rolling hillside offer a stark beauty and hope for all who come to remember and pay respect.

The memorial is not yet complete. Several more phases are planned before it is finally finished, but that should not deter you from visiting. If only the scarred earth had been left and nothing constructed to note the site, that alone would have been sufficient, as the area possesses such a weight of solemnity about it that one must visit the site to truly comprehend it.

Because the memorial is very remote, no food is available. If you are hungry, there are plenty of restaurants and fast food places when exiting the turnpike in Somerset. Restrooms are provided at the site but, as there is no running water, the only facilities are very clean pit toilets. Hand sanitizer is provided for visitors’ convenience.

If you are looking to expand your day trip, there are several covered bridges in the area. Bedford is only a few miles further east on Route 30 and has a number of attractions, as does Somerset.

Route 30, also known as the Lincoln Highway, was the nation’s first memorial to Abraham Lincoln and the first U.S. transcontinental highway. Driving along this stretch of road will refresh your mind of just how beautiful Pennsylvania is.